“Do what you love, and love what you do, and you can get through
every single day thinking that way.” ~ Don Boger

Earning AFDR DSR Hall of Fame honors for March 2020 is Don Boger of RightWay Food Service who has been a DSR for 50 years! He began as a driver at 18 years old, but always wanted to get into sales and by 20, Don got that chance by taking the lowest performing route of $300,000 that opened up. Because Boger had been a driver and had also worked in the warehouse, he was familiar with all the products, so after three weeks of training he was ready to go!

Since he has done both jobs, Don learned that the customers are a bit more up front with the driver than the salespeople. The only two people customers really know your company by are the Driver and the Salesperson. The drivers at RightWay wear uniforms, check orders in and handle issues on the spot. As a DSR, it is a game like college football, a game of speed… think fast, act fast, and respond fast, and your customers will be impressed.

When Don is driving between customers, he’s thinking about everything he wants to discuss with them. He never sees a customer without a flier in his hand for them… could be a hot sheet, monthly special sheet, clearance items, supplier sheet, etc.

Organization is KEY for Don. Organizing his route is very important to Boger and continually moving. He has files for every day, Monday – Friday, so he can pull out that day’s file and put the accounts in the order he’s going to see them that day and puts that file on his passenger seat in his car. Don has an inside sales manager who knows most of his customers by name that will help him out by calling if a truck breaks down or is running late.

Boger has the same places (fast food places where he won’t be bothered) he stops every day to sit down with his laptop, phone, and portable Wi-Fi to enter orders, answer emails, texts, and voicemails. He doesn’t end his day until he has answered every single one.

Another motto of Don is to “Never put off until tomorrow what needs to be done today because tomorrow has its own things to be done.”

Boger has a system set up when customers web order that alerts him so he can review the order to make sure it’s correct and to know what’s going on in each account. It’s the only way to keep up with them, just imagine all the things you’d miss for that account if you didn’t. Don still goes in to see his accounts every week even though they web order.

Prospecting: If you’ve been referred to an account by one of your accounts, go there immediately. Most of his prospecting is coming from referrals, which means loyalty plays a big part. Don has worked hard building relationships and being consistent to earn that loyalty, and it pays off.

Don cannot complain, “After dedicating my life to this, I don’t have regrets at all. It’s been great to me and great to my family.”

Be a Resource and Sell Something! 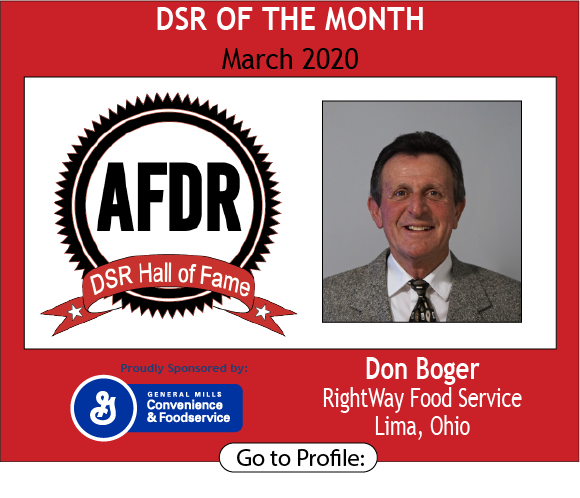