Jay Sorenson, a DSR proud to be representing Upper Lakes Foods out of Cloquet, Minnesota is the DSR of the Month for January 2016 and has been inducted into the AFDR DSR Hall of Fame.

Sorenson started his foodservice career by spending the first 16 years with a local restaurant chain in Minnesota. He began by washing dishes and worked his way up to kitchen manager and eventually moved into the general manager position. Jay also spent a good deal of time as a trainer for kitchen managers and operations for that chain.

Over the years of meeting and observing what DSRs did and did not do, Sorenson thought he could be successful as a DSR, and Upper Lakes Foods gave him that opportunity.

Jay explains in his audio interview that the toughest part of learning the job was product knowledge. He says, “I was an expert on all the products we used at the chain I worked for, but it was a steep learning curve to learn the thousands of products Upper Lakes Foods had for him to sell.” This Hall of Famer said that Broker and Manufacturer Reps riding with him for the first 15 months made all the difference in him being able to learn the products they represented.

The INSIDE SALES TEAM at Upper Lakes gets a ton of praise from Sorenson who gives them credit for being there for him and his customers. The team takes such great care of his customers when he’s out building more business or sampling products that he can actually answer his phone.

Sorenson does not go into a prospect promising he’s going to save them money, but he always asks the prospects if he can exit out the back through the kitchen so he can see what kind of equipment they are working with so he does not bring any samples in that can’t get prepared right. Jay makes mental notes on all the other products that he discovers along the way. He gets that opportunity in about 2 out of 10 requests!

Samples work 8 out of 10 times for Jay because he prepares it with the folks in the back of the house and then brings it out to the front of the house to give everybody a try, even regular patrons he spots. He finds out right away if those samples will work there or not.

Topics discussed on the Audio Show: 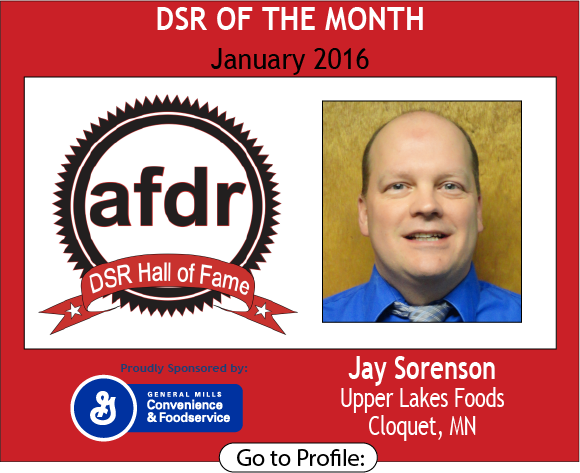