Marcy Callahan is the latest inductee into the AFDR DSR Hall of Fame as the DSR of the Month for July. While working two jobs, with one of them being a server and bartender three nights a week, some of Marcy’s regular customers were sales reps who told her they thought she would do really well as a DSR. Well, the rest is history…

That was twenty years ago, when Callahan began practicing cold calls by calling Sysco’s HR director every day for three months in a row following up after her interview with the company. They finally hired her because the HR lady said she was the most persistent person she had ever met. Marcy says that her persistence and organization have helped her build a great business, and those traits make collecting A/R one of the easier parts of her job.

This Hall of Famer explains in her interview what type of person makes a good DSR, while also giving some great tips and advice for DSRs on making cold calls and on starting relationships with prospects.   Marcy says that it’s all about relationships because people buy from people they like. On first calls, she’s just trying to find some common ground with the operator, so she does not take her laptop or an application in with her.   You want to find out what their hot buttons are and what their likes and dislikes are. She tries not to make it all about business.

Marcy says ANY DAY IS THE RIGHT DAY TO CALL ON A PROSPECT!! She likes to keep things structured in her follow-up by going back to prospects on the same day of the week until they start buying. She is always trying to find more time to call on prospects and her advice for all DSRs is to call on prospects AS MUCH AS YOU CAN!

Callahan explains in detail how she organizes and sets her plan for the week on Sundays and how she manages her A/R. She also gives DSRs advice on getting customers set up online to make their payments.

For all the Greenhorns out there… Marcy said it took her about two years to get a good working knowledge of the business, so don’t think you’ll never learn. She also tells how rewarding the business will become, so don’t ever give up! 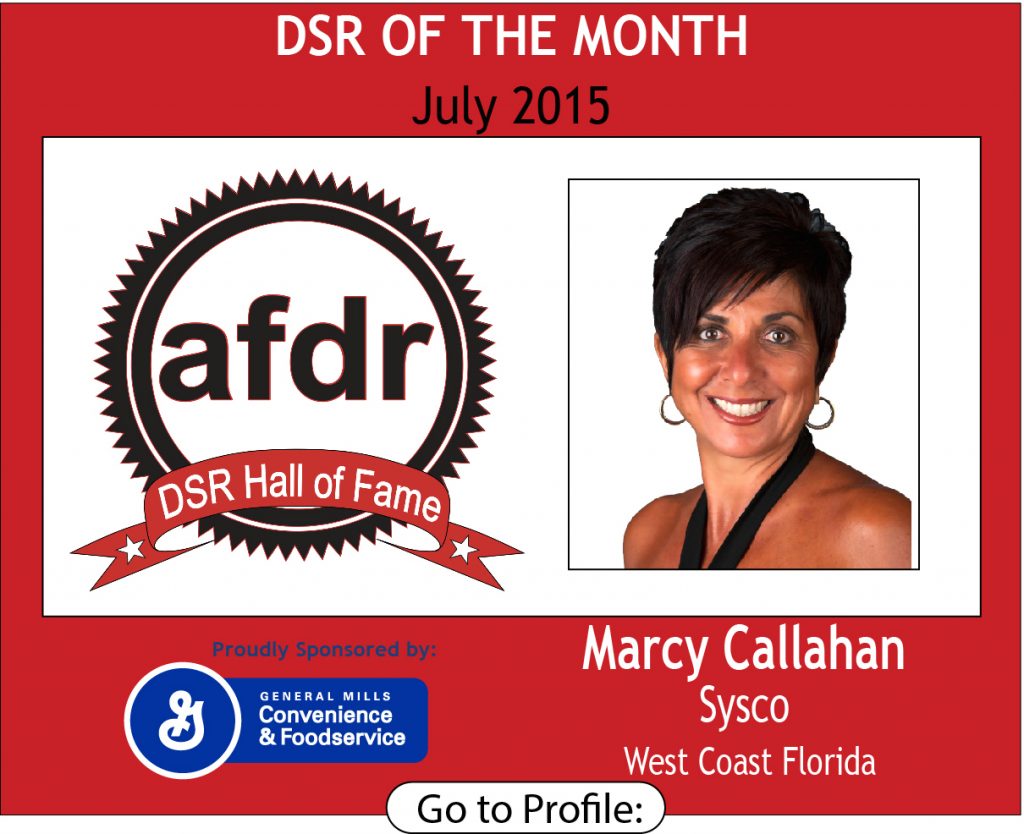 DSR Years of experience:    20 years    Annual volume:     $3.5 million Number of active accounts:    20 Average line items per stop:    37 Territory/City/Area where you sell:   Venice, Port Charlotte, and Arcadia (Florida) Favorite type of account:       Local owned and operated restaurants where we can work together to creative new food experiences. Best tools that help you sell:      Market updates from our specialists are very helpful to pass along to customers to keep them updated on current market conditions. I also love to use my personal dining experiences while traveling to take these menu ideas back to my customers. Where you learn about product info:     in house company training and online Favorite website:       Suppliesonthefly.com Hobbies:   I enjoy traveling, relaxing on the Siesta Key beach, and spending time at Bryant’s Pond with my family and friends.          Favorite Brand to sell:    Sysco brand