For 31 years, the latest inductee into the AFDR DSR Hall of Fame, Greg Dixon has been selling groceries for Brown Foodservice out of Louisa, Kentucky. Dixon was 24 years old and fresh out of college without any knowledge of the restaurant industry when he applied to Brown Foodservice claiming, “He was willing and able to do anything,” so they put him in training as a DSR. Greg says he’s sure glad they did because every day is something new.

The training program he went through when he first started was typical for most DSRs back then, and 31 years later, it is pretty much the same. For six weeks or so he rode with other DSRs on a daily basis and ran the routes of DSRs who were on vacation or had to miss a day. Greg found that working on other Reps routes, he learned his way around plus the customers would teach him valuable lessons on what he was about to be faced with when he got out on his own.

Dixon thought that after those first six weeks he knew just about everything he needed to know and was gung ho to get started. When he received his own route, he quickly learned that he didn’t know…what he didn’t know. It took about a year for him to learn there are new products and trends created every day in this business, and he’s still learning today what to do next tomorrow.

According to Greg, the June DSR of the Month, the only thing that’s really changed in the foodservice distribution business is the way DSRs obtain information and the way they get orders in. Operators still count on their DSR to come in each week and help solve problems; show new products; work on the menu; discover new trends; and get them the products they need, when they need them. Cut off times are still the same. We still pick the orders, stage them, and ship them like we did 31 years ago.

Greg says that out of all the different gadgets he’s used (Key punch, MSI Units, Laptops), his cell phone has become a main source of communication with his customers, even for receiving orders. He never thought that would happen.

Cold calling and prospecting has not changed much either over the years. Dixon says the biggest change in that process is that he’s really comfortable calling on new prospects because he’s not worried about being rejected like he used to be. Greg talks about a recent new account that he called on for six months before they place their first order. He says unless they tell him not to ever come back, he keeps calling on them until they buy. 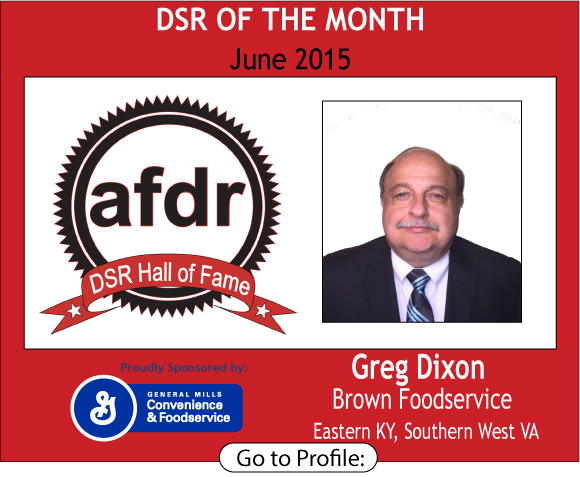