Skipper Nelson of Merchants Foodservice Alabama division is the latest inductee into the AFDR DSR Hall of Fame as the March DSR of the Month for 2016.

Nelson got his start in the foodservice business because his wife got the idea when at a reunion in Chicago. By the time Skipper got to the party, his wife had decided they were going back to Alabama to start a restaurant.

He continued working for UPS for a few years and then went full time at their restaurant on the Alabama Gulf Shores. Over 14 years, Skipper learned a lot about the restaurant business including even how to replace the roof as it was blown off five different times in hurricanes and storms. Nelson decided it was time to try something different.

Nelson used his restaurant business experience and went to work as a DSR. His first sales territory was full of white tablecloth operators which were quite different from the operation he ran which was mostly Italian and sandwiches.

Instead of trying to guess and send the wrong items out, Skipper chose to use a tool like a Meat Buyers Guide to take into his accounts to ask his customers to show him exactly the product they wanted. Many of Skipper’s customers felt like they were mentoring and training him because of his eagerness to learn, but he was also able to help them with what he did know.

Skipper talks about when he was a Greenhorn he would call on and sell just about any and every account that would buy anything, even if it was only three cases in a month! These days he does much more research on every prospect using Google and Yahoo searches on everything from the menu to ownership. He also visits a prospect’s operation to see what kind of cars are in the parking lot, what kind of music is playing, what the lighting is like, whether the restrooms are clean, and what generation of patrons are there at lunch.

Topics discussed on the Audio interview with DSR of the Month, Skipper Nelson: 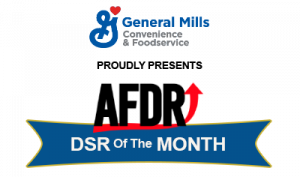 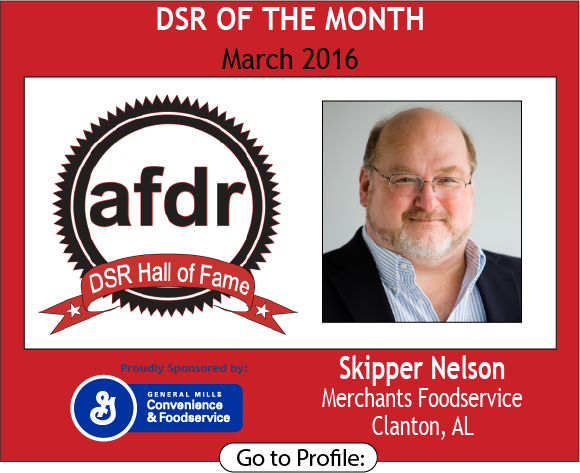 DSR Years of experience:   17 Annual volume:     3.8 million Number of active accounts:   29 Average line items per stop:    31.6 Territory/City/Area where you sell:    Gulf Shores, Orange Beach, Mobile Alabama Favorite type of account:     Seafood Restaurants Best tools that help you sell:     Owning my own restaurants for 14 years and doing this for 17 years Where you learn about product info:    Sales Meetings Favorite website:   Google – I use every day as a resource for answers and information for customers  Hobbies:    Home Improvement
Favorite Brand to sell:   Hidden Bay